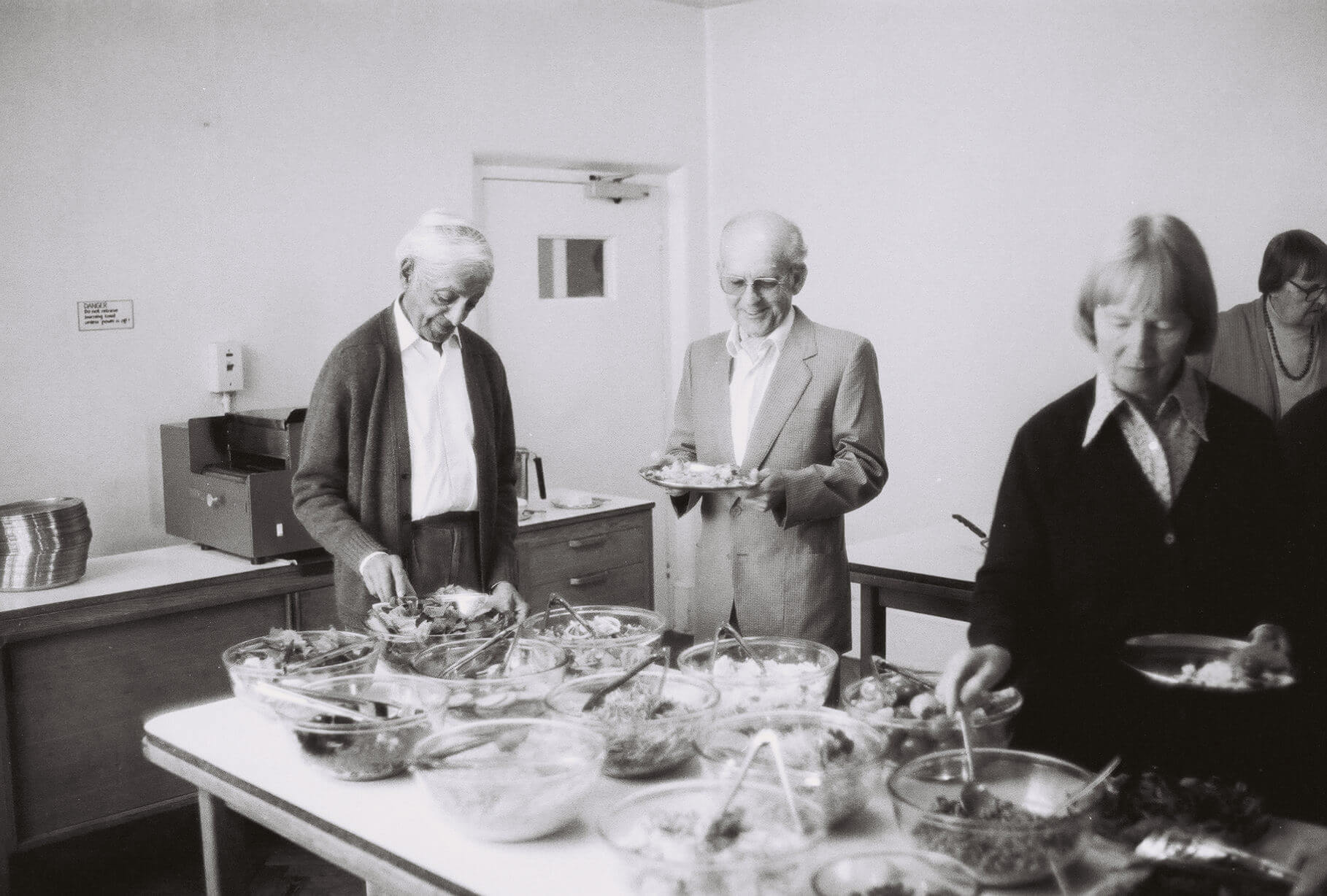 The following 2011 interview, organised by Tess Larosse for the 25th anniversary of Krishnamurti’s death, appeared in the two main periodicals of the Saanen Valley — Gstaad Life (English) and Saanen Anzeiger (German). It describes my engagement with Krishnamurti and his work and hints at what Krishnamurti talked about throughout his life. The introduction was based on Krishnamurti Foundation material and The Beauty of the Mountain.

Jiddu Krishnamurti was born in India in 1895 and died in the United States in 1986. He was a writer and speaker who addressed fundamental questions of human conflict, suffering, intelligence, perception, beauty, and love. He spoke throughout his life in many parts of the world to large audiences as well as with numerous individuals, including writers, scientists, philosophers, and educators. Asked to describe what lay at the heart of his work, he said:

"Truth is a pathless land. Man cannot come to it through any organisation, through any creed, through any dogma, priest or ritual, nor through any philosophic knowledge or psychological technique. He has to find it through the mirror of relationship, through the understanding of the contents of his own mind, through observation and not through intellectual analysis or introspective dissection..."

Krishnamurti was concerned with all humanity and stated repeatedly that he held no nationality or belief and belonged to no particular group or culture. In the latter part of his life, he traveled mainly between the schools he had founded in India, the United Kingdom and the United States. He stressed that only a profound understanding can create a new generation that will live in peace. Much has been written about Krishnamurti, affectionately known as `Krishnajr or ‘K’. And because of his well-known talks and regular visits to Saanenland, I interviewed someone locally for GstaadLife who for several years had a connection with him.

Friedrich Grohe — an incredibly fit and agile 82-year-old who climbed every peak in the region due to his love of nature and hiking — first met K in Saanenland in 1983 while K was here giving his annual talks by the Sarine. From then until K’s death, Friedrich continued to see him in various places: here, at Brockwood Park in England, at Ojai in California, and in India. Friedrich also became a trustee of the Krishnamurti Foundations, which are responsible for the schools K founded as well as for the archiving and publication of his work. In the summer of 1985, K’s last in Saanenland, he stayed in Friedrich’s rented apartment in Rougemont.

Tess Larosse: What was it that first attracted you to what this man had to say?

Friedrich Grohe: A friend gave me a book by Krishnamurti. In the book K said something like, If you don’t like the existing schools, why don’t you start your own? I wanted to do this and eventually went to his talks and was amazed. (The full story can be found in my booklet The Beauty of the Mountain.) One of the things that most struck me was when he said, “Love has no cause.”

TL: Do you think coming from a German industrial family, and a firm such as Grohe, you needed something more ‘philosophical’ to connect to?

FG: I knew I didn’t want to spend my whole life in industrial business, though it’s fun to produce something useful and maybe even beautiful. It made no sense to me to accumulate more and more money. What for? And I was interested to support a new kind of education.

TL: K traveled the world. Do you know how he first discovered Saanenland?

FG: Friends invited him. His first meetings were held in the Landhaus in Saanen in 1961. During this time he stayed at Chalet Tannegg in Gstaad, rented by a friend, Vanda Scaravelli. The chalet was taken down a few years ago. When the Landhaus proved too small for the growing numbers who came to hear him, first a tent and later a big marquis was put up on land that is now the football pitch in Saanen. Aldous Huxley, the English writer and a close friend of K, attended the first meetings. Yehudi Menuhin attended a couple of years later, which I’ve heard was his introduction to Saanen.

FG: Besides meeting the many people who came to see him, not only in the tent but also in smaller groups and individually, he loved walking in the mountains. Here is an excerpt from one of his many books (Krishnamurti’s Notebook), where he describes the area around Saanen and Gstaad:

"Crossing the little wooden bridge and looking up the stream, there was the mountain, surprisingly delicate, aloof, with inviting strength; its snow was glistening in the evening sun. It was beautiful, caught between the trees on either side of the stream and the fast-running waters. It was startlingly immense, soaring into the sky, suspended in the air. It wasn't only the mountain that was beautiful but the evening light, the hills, the meadows, the trees, and the stream. Suddenly the whole land with its shadows and peace became intense, so alive and absorbing. It pushed its way through the brain as a flame burning away the insensitivity of thought."

TL: His talks here in Saanen were internationally famous. What kind of people attended them?

FG: All kinds, from all walks of life. Some stayed in posh hotels, others camped along the river. A few were hippies, and in the ‘705, a certain guru sent his followers, who dressed in orange robes. No doubt this gave the wrong impression to many local people. K actively spoke out against gurus and their followers, accepting no such following himself.

TL: One of the six schools that Krishnamurti founded is in the beautiful English countryside — Brockwood Park School in Hampshire. What was his intention for the school?

FG: The seed of Brockwood Park was sown in Saanen when several educators approached Krishnamurti about starting a school in Europe. In addition to academic excellence, the intention is to bring about a quality of total integrity as human beings, so that there is a sense of harmony in oneself, in relationship and there-fore potentially in the world at large.

TL: With all the craziness going on internationally at the moment, do you think the world is missing someone like Krishnamurti?

FG: Human beings with the quality of perception, understanding, and compassion that K had are rare and of course always very much needed. That’s why, in my opinion, his insights are deeply relevant. They are in no way sectarian or confined to any political, economic, social or religious ideology. Instead, they address world problems and the human condition as a whole.

"The crisis is not economic, war, the bomb, the politicians, the scientists, but the crisis is within us, the crisis is within our consciousness. Until we understand very profoundly the nature of that consciousness, and question, delve deeply into it and find out for ourselves whether there can be a total mutation in that consciousness, the world will go on creating more misery, more confusion, more horror. So our responsibility is not some kind of altruistic action, political or economic, but to comprehend the nature of our being — why we human beings, who have lived on this beautiful lovely earth, have become like this."

TL: But he was respected by some politicians and scientists?

FG: Yes, certainly. He was deeply concerned with the state of the world. Although he spoke against nationalism and every kind of political faction as among the causes of division and conflict, some world leaders, like Nehru and his daughter Indira Gandhi, had personal meetings with him, and he received a State reception in Sri Lanka. He was awarded a peace medal by the Pacem in Terris Society at the United Nations. He was also concerned with the potential effects of science on the future of humanity. He had many filmed dialogues with scientists and psychologists to go into the implications of what he was talking about. One such scientist was the leading theoretical physicist and philosopher David Bohm. He even conducted a seminar on creativity at the physics laboratory in Los Alamos, New Mexico, USA. The thing is that K had a global out-look and statesmen and scientists who shared that outlook were naturally drawn to him and his teachings.

TL: K was viewed by many as a religious teacher. How do you think the Church viewed him?

FG: He emphasised the meaning and depth of religion beyond the confines of any dogma or organised system of belief, and therefore those who could see beyond or were not bound by tradition took an interest in his work. For example, there are filmed dialogues between Krishnamurti and the Jesuit priest Eugene Schallert, as well as with Buddhist monks and Hindu pundits. The Dalai Lama met with K and thought very highly of him. K viewed his teachings as a mirror in which we might see ourselves reflected as we actually are, both in our particularity and in our universal humanity.

I find the following quote (from K’s 8 February 1981 talk in Bombay) important in itself and remarkable for how early it was made and had I come across it at the time of the interview would have wanted it included:

"That is, a man in his relationship with another has not been able to be changed. And 'society', which is an abstraction, is now being changed not by man but by machines, not by any form of endeavour (political, religious, economic, and so on), but it has been changed by the machine which man has invented. It is called `computer'."