By Friedrich Grohe February 17, 2020 No Comments

The Saanen Museum exhibition: J. Krishnamurti in Saanen – 1961-1985, which ran for three months last summer and is running again for four months this winter-spring.

The brochure is a shortened version of the posters appearing in the exhibition. German and French translations are also available.

The exhibition also features four screens playing extracts of Talks plus some of the Beyond Myth and Tradition installments – some of the material with German subtitles and some with French. Also playing are the Brockwood films on the School and the Centre. The bronze bust of K by Nigel Boonham (owned by Javier) is in a prominent corner, and many, many books are displayed, in several languages, some for sale, along with various leaflets, brochures, prospectuses, Bulletins, etc., to take away.

Interesting people have been visiting the exhibition. Recently there was a Zurich university professor of Education, who had grown up in Gstaad, where his father had been a milkman. In earlier letters we had assumed that Professor Roland Reichenbach’s father had gone to the talks but recently Prof. Reichenbach wrote the following:

There was a (little) misunderstanding, I guess, when I visited the exhibition in Saanen with my daughter Chloé: My father (who is still alive) did not attend any talk of Krishnamurti. As a milkman in Gstaad for many years he made deliveries to the chalet of Krishnamurti at the Oberbort in Gstaad. As a boy my father took me (and my brothers) with him on work during our summer breaks. He always talked of great respect of Krishnamurt who he “met” from time to time (by accident). My mother told me that Krishnamurti once gave him a pair of trousers, of grey color, and, apparently, very solid – my father wore these trousers for about twenty years or so to go to work… My parents rented a room to an American woman who attended the talks of Krishnamurti. She left a book of Krishnamurti in the room which became my bedroom later. I tried to find this book again, recently, looked through all the books at home in Zurich and at the University and was sure to find it – but I didn’t find it. However, I can recall how I was interested to read in this book at the age of about 13. My English was bad and I did not read very much as a boy. But I figured that this must be an important book, written by an author who is in  touch with something bigger than daily life… My father is himself a very modest and equilibrated person, I would say. And when we would deliver dairy products to the employees in the kitchen of Krishnamurti’s house (was it “Tannenegg”?), he would say something like: “Now, we go to Krishnamurti. He is a very friendly and wise man” (even though he was not at all familiar with his thoughts or teachings) – but to feel the respect which my father expressed had a positive effect on me. In the kitchen at the basement of the house (I have only been in the kitchen, of course, like my father) I would think: I am in a house of an important man…

Anyway, these are little memories, but they have some meaning to me.

Some visitors stay for just 10 minutes and say Hello or make no contact at all. Some stay for hours reading all of the posters, watching many of the videos, and speaking with us. They might also leave their contact details. We are amazed by how many people are interested or who have been touched by the teachings for many years. Probably in general we underestimate the numbers, although now with YouTube recording click after click, it’s likely we have a better idea.

If you wish to receive copies of the exhibition brochure, please let us know. We could also send the German and French versions.

With warm regards and rock on in 2020 dear friends! 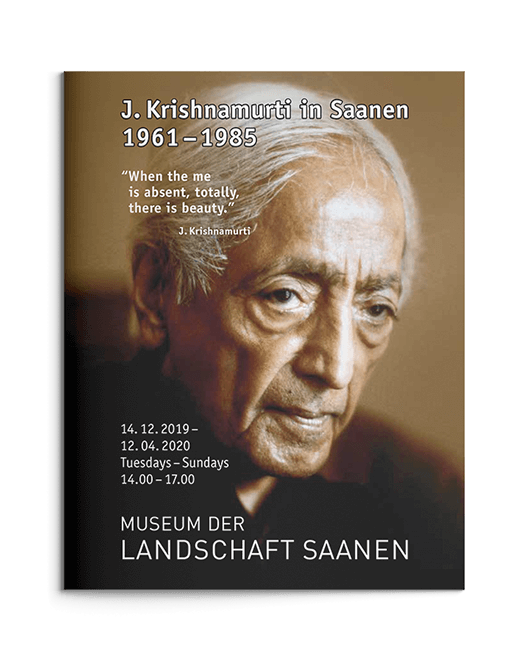 The brochure is a shortened version of the posters appearing in the exhibition. German and French translations are also available.