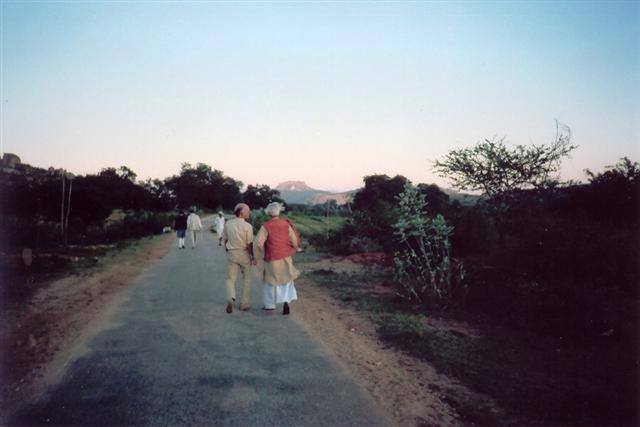 Interview with Friedrich from: Krishnamurti – 100 Years

It was in 1980 that I first read a book by Krishnamurti, The Impossible Question. Even though I found that Krishnamurti cannot be read like a novel I could not put it down. He appeared to be saying the opposite of what one had learned and experienced. One seemed to have vaguely felt before what he expressed there in clear, simple and overwhelming language. Although I knew in 1981 that Krishnamurti used to give a series of public talks each year at Saanen, Switzerland, I had no desire to attend them as I war quite content just studying his books. In fact, I lost interest in philosophy, psychology, literature, art, and the like, which had once captivated me, became I suddenly felt: “This is it!” Other people’s books simply became superfluous. This was a time of great change for me. Besides other things, I was about re retire from business life. Previously, I had not had much time to face essential questions, but now, all at once, K made it clear to me how important it was re concern oneself with central issues like death and love, pleasure and pain, freedom, desire and fear. The more I explored the teachings, the morefascinarmthey became. I attended the talks at Saanen, Switzerland for the first time in 1983. Sitting on the steps which led into the giant tent where about two-thousand people had gathered, I would listen to K Here, under the awning, I was protected from the heat and could still enjoy afresh breeze. As I usually walked all the way from Rougemont, which takes about one and a half hours, and would arrive just before the talks started, I could use the side entrance and did not have to sit amidst the crowd. Right in front of the podium from where Krishnamurti spoke, people were squatting and pushing against each other; every square inch of sitting space was highly valued. At Saanen and Brockwood_ people would queue all night long in front of the tent to be the first in when it was opened. In the United States and India, it was usually a bit more relaxed. This first summer was so hot that on my hike back to Rougemont I bathed in the Fenilbach River which would normally have been too ice-cold to have done so. In the tent, it was possible to buy books by K translated into various languages, and I had been glad to fill my rucksack with them. It was overpowering to listen to him.

"Another striking aspect of being in his company was that my perception of the beauty of nature was more intense."

He emanated so much energy that I simply could not sit directly across from him. He spoke simply and clearly, with few gestures and no rhetoric. While listening to him, I would forget about food and drink and would not even take note of the heat. My personal contact with him developed very quickly. To meet the man personally had such an impact that from then on I went to all the talks in Brockwood, India, Ojai, and Washington till the last talks in Madras in December /January 1986, just before his death. This necessitated intensive traveling, more than half of the year I was out of Switzerland. My contact with family and friends decreased considerably. Those were the outer changes. Essentially my lffe had already started changing. It seems that it was time to meet a man like Krishnamurti. My full time business lffe I had already lefi behind. My consuming mountain climbing activities had been considerably cut back since a close friend and mountain guide had died in a climbing accident. My longtime passion of collecting paintings had already lost its appeal. When K visited my house at Lake Geneva, as he stepped inside he covered his eyes for a second with an exclamation of startled surprise. He seemed to be struck by the powerful ambiance of all the paintings. This was just the final step. I also had already stopped eating meat, but here as in many other areas K accelerated a development which was already on the way. When he said during a gathering “We eat dead animals,” something became absolutely clear to me and I stopped eating meat once and for all. But perhaps the most impactful statement I recall him making in one of his talks was: “Love has no cause.” These words were like a revelation to me. Another striking aspect of being in his company was that my perception of the beauty of nature was more intense. On some occasions, I would accompany him on his regular afternoon  walks. Usually some close friends would go with him on such walks, but he would talk very little on these outings. He had an intense relationship with the things of nature. He maintained that the roots of trees had a sound, but we don’t hear it anymore. Once, when walking across the Brockwood meadows behind the “Grove,” I was about to pass between a group of five tall pine trees. He caught me by the arm and said: No, around them! We must not disturb them. An event which took place in India also showed this intimate relationship he had with living things. There was a plantation of big mango trees at Rajghat which did not yield any fruit. Therefore, it was planned to cut them down. K recounted with a twinkle in his eye how one day he walked among the trees and said to them: Listen, !fyou do not bear any fruit, they are going to cut you down. They bore fruit the next year. Krishnamurti called me his brother, his ange gardien. In 1984 in Schoenried he embraced me and suggested I should live with him. I knew what he meant by that. He had asked several people before to live with him very closely so that he could work with them, saying that they then would change. But I was not ready for this total change. I could not imagine then letting go of everything. Would I be ready to do it now, ten years later? I don’t know. At the end of his life K said that nobody had understood what he had to say. With reference to one of the jokes he used to tell, “Everyone has to die—perhaps even myself” I could say: “Nobody has understood him—perhaps not even myself?’

"once, when walking across Brockwood meadows in the 'grove,' I was out to pass between a group of five tall pine trees, he caught me by the arm and said: no, around them we must not disturb them."